The Holidays: Good for Business, Good for Fraud For consumers, the days between Halloween and Christmas are defined by the general chaos of spending an inordinate amount of time shuffling in and out of shops, both in-store and online, trying to find the perfect present for the most ideal price for each person on their shopping list. For retailers, the days between Halloween and Christmas are spent in a much deeper state of chaos: frantically deploying resources during all hours of the day to meet the dramatic increase of customers’ needs and demands during the holidays – all while keeping their bottom line intact.

”It is that magical time of the year for retailers. The period between mid-October and late December can often make the difference between success or failure in the retail industry, and this year will be no exception.” -Infowars

The holiday season has historically been the busiest time of year for retailers, and this year, with an estimated $630.5 billion in sales to be made this holiday, it is shaping up to be the busiest holiday season on record. In fact, the 10 busiest sales days of the year all occur in November and December; the following days are predicted to be the biggest sale days for 2015: 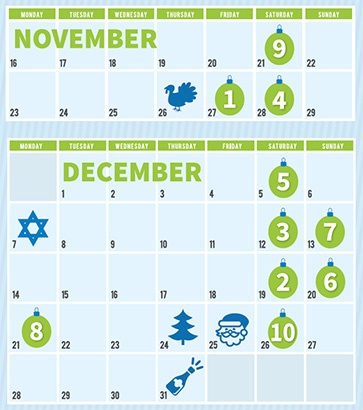 Sales during the holidays account for 20-40% of the average retailer’s total annual sales, with sales during the winter holidays outpacing the total spent during all other holidays combined by hundreds of billions of dollars.

The National Retail Federation predicts that “sales in November and December (excluding autos, gas and restaurants) to increase a solid 3.7 percent to $630.7 billion – significantly higher than the 10-year average of 2.5 percent. Online sales are forecast to increase between 6 and 8 percent to as much as $105 billion.” Consumers are expected to spend an average of $805.65 this holiday season.

In fact, what Americans plan to spend on Christmas this year is greater than the yearly GDP of the entire nation of Sweden. –Infowars

Retailers of recent years have been all too aware of just how rampant it can be. Fraud prevention is key during the holidays: when surveyed, one retail loss prevention executive is quoted to have said “Improve pre-holiday sales staff training” when asked when he will be doing differently for Holiday 2015.

In order to combat fraud through fraud prevention during the holidays, retailers need to pinpoint the types of fraud that are most prevalent during the rush of holiday sales. Some of the most common types of holiday sales fraud are the use of counterfeit money, return fraud, and gift card fraud.

With the convenience and the almost universal acceptance of debit and credit cards, it could be assumed that consumers will rely heavily on payments in the form of cards. However, due to massive data breaches in the past few years at the some of the largest retail chains, such as Target, and financial institutions, such as JPMorgan Chase, fresh on the minds of consumers, many have expressed their intent to make as much holiday purchases as they can with cash.

Take Karen Swim, a 50 year-old marketing professional from Sterling Heights, Michigan, for example, who had been planning on shopping at Target the day their data breach was announced:

“It could have happened to me, so it freaked me out . . . . I’ve already been a victim of a cyberattack on my website, and that was difficult to fix it."

Karen currently uses cash for the majority of her shopping, not matter the time of year. 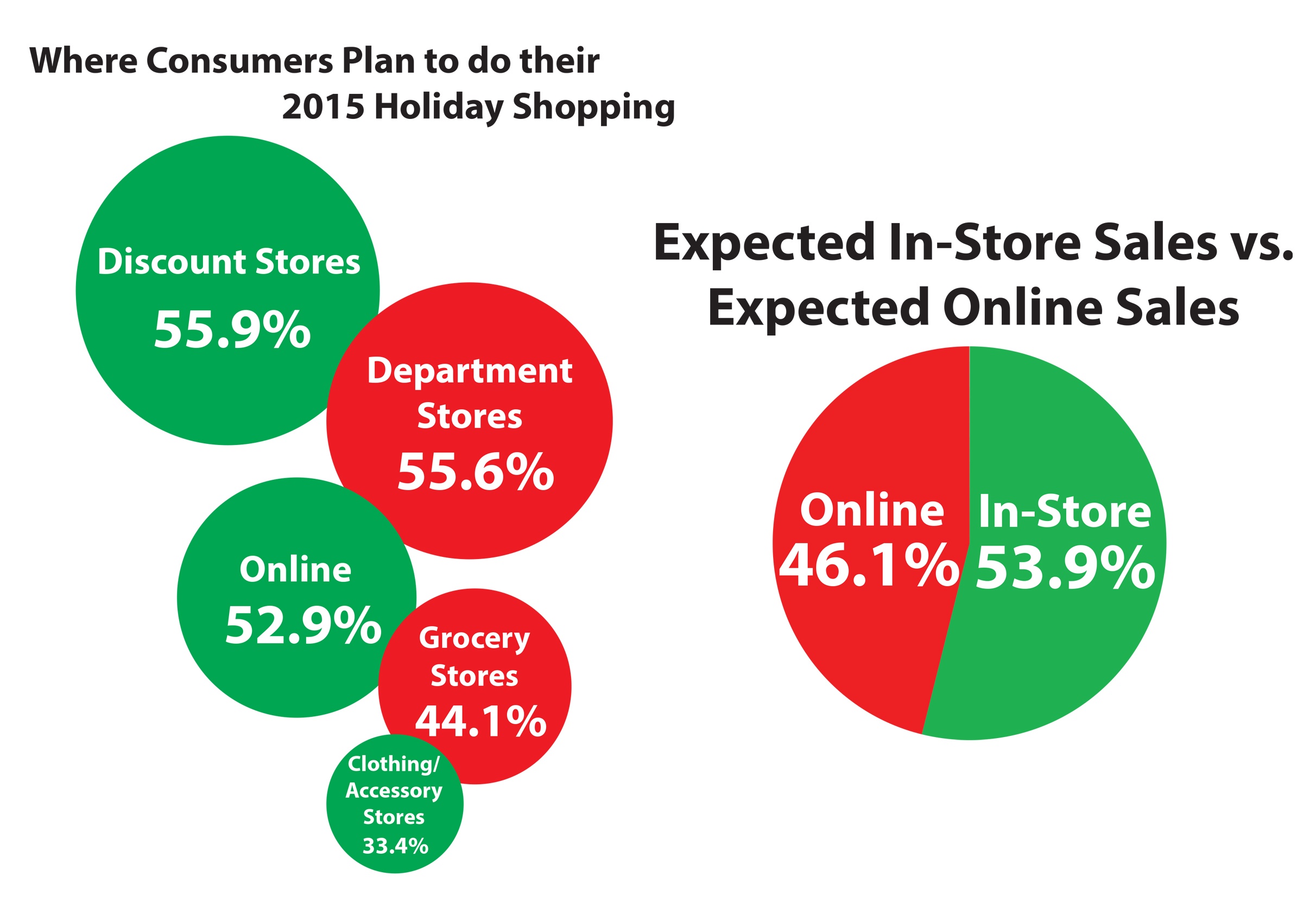 Considering the fact that over half of all sales – meaning a little over $315 billion – will occur at in-store locations where cash is an acceptable form of payment (versus the online environment). Of course, this isn’t to say that retailers should expect consumers to suddenly spend nothing but cash over the holidays; it simply means that retailers should expect to deal with more cash this holiday season than previous years. and with this influx of cash, counterfeit money, which has only become easier and easier to make thanks to advances in technology, will be even harder to detect:

”We’re always seeing an increase in counterfeiting during the holiday season . . . . People are printing their own money in their home with all in one printers, going down to Walmart, K-mart, Sears, Macys, all the stores.” – John Rotella, United States Secret Service Resident Agent in Charge, Reno

Movies and television shows have created the idea that criminals use counterfeit cash when making illicit deals with each other, but in reality, this is simply not the case. Counterfeiters actually have a difficult time finding clientele for the fake money stateside; instead, they sell the counterfeit cash to foreign criminals who can more easily spend counterfeit us cash overseas.

“We’d been talking to some drug guys, heavy workers who were moving cocaine . . . . But to [my] surprise, guys who were perfectly comfortable shipping cocaine by the container load drew the line at phony bills. ‘No thanks, and be careful’ was where that conversation ended . . . . ‘I was saying to myself, Jesus Christ! These guys were doing a lot worse than moving counterfeit bills, and they’re telling me to be careful? Are they screwed up?’”

And once the fake money is spent, it quickly finds its way into the hands of the unsuspecting public and back into the US.

With both individuals at home and criminal masterminds creating counterfeit cash, retailers can be sure that some of this counterfeit cash will find its way into their stores.


Whenever there is an expected uptick in sales, especially during the holidays, you can expect that there will also be a reciprocal uptick in fraudulent activities. And with $630.5 billion in expected holiday sales, there is sure to be a proportional rate of fraud, especially return fraud. It was estimated in 2014 that holiday return fraud cost retailers about $3.8 billion.


What is Return Fraud?

Return fraud is exactly what it sounds like: the attempt to defraud a store through its return process. From the National Retail Federation:

”Return fraud has become an unfortunate trend in retail thanks to thieves taking advantage of retailers’ return policies to benefit from the cash or store credit they don’t deserve.” –Bob Moraca, NRF Vice President of Loss Prevention

Return fraud can take various forms, with the following types retailers need to keep an eye open for most during the holiday season:


What is Gift Card Fraud?

During the recent years, gift card fraud has become more and more frequent due to the rising popularity of giving gift cards as presents. Gift card fraud typically describes a process in which a criminal obtains a list of gift card numbers from gift cards on display either by discreetly writing them down or skimming them using a card reader. he/she will then check the gift card numbers online until one of the listed cards has been purchased and activated. once the gift card has been activated, the criminal can then transfer the balance on that gift card to another card or convert the balance into cash, leaving the person who received the gift card with zero balance.

As popular as this type of fraud may be, it “is fairly low-level and does not result in a huge loss to the merchant” as gift cards have a finite amount that rarely enters the triple-digits. however, the issue with gift card fraud is more symbolic than financial: “Some retailers will reimburse the customer with the face value of the gift card, but this ends up being a reputational hit for the retailer, as well as a headache for the consumer.”


How to Protect Your Bottom Line during the Holidays

As Independent Mail correctly points out:

For any business, the loss comes out of their bottom line; small businesses can’t afford to lose much.

To minimize loss and protect the bottom line, businesses of all sizes should at least do the following:

"Staffing and training are a significant investment area for loss prevention executives. Among other measures, store associates could receive additional training on topics such as inventory preparation, safety, cash handling best practices, shipping and receiving, among others. Temporary or seasonal staff, too, will get training this year, likely with a focus on preventing shoplifting and fitting room theft. Training may also be facilitated by tablet devices and webinars to efficiently and effectively deliver the training to any store staff who needs it." – National Retail Federation 2015 Holiday Planning Playbook

In addition to training both full-time staff and seasonal staff in all areas of loss prevention, retailers should also consider implementing the following solutions to combat all types of holiday fraud:

Want more information about preparing your business for the holiday season?
Check out our past blog posts about the holidays:

Beware of Return Fraud - Especially during the Post-Holiday Season

For most, the start of a new year is a time to reflect on goals and positive changes. It is when...