How Counterfeit Money Can Be Used as a Weapon

Counterfeit money, of course, can be used to swindle real money and products from businesses, but did you know that counterfeit money is often used as an economic weapon?

The introduction of counterfeit money into circulation can cause the currency to inflate - i.e., the value of that currency drops – and if the currency inflates enough, the country’s economy can collapse. The effects of artificially adding (counterfeit) currency into circulation have been taken advantage of by many nations in order to conduct warfare on an economic level – in a sense, it can cause more damage than actual, physical warfare can.

On November 20, the U.S. Treasury Department imposed sanctions on 2 individuals and 4 companies for counterfeiting hundreds of millions of dollars worth in Yemeni money in an attempt to fund Iran's already-sanctioned Islamic Revolutionary Fuard Corps (IRGC) and to destablize Yemen.

The sanctions were deemed necessary due to the scale of the counterfeiting operation. As Treasury Secretary Steven Mnuchin stated, "This sceheme exposes the deep levels of decetion the IRGC is willing to employ against companies in Europe, governments in the Gulf, and the rest of the world to support its destabilizing activities."

The sactions "freeze the compaines and individuals out of much of the global banking system and bar financial institutions subject to U.S. law from engaging in business with them." Addtionally, any assets in U.S. jurisdictions that are owned by the companies and individuals are frozen.

The purpose of the sanctions are to stop the economic consequences of counterfeit money from happening - by limiting the counterfeiters' abilities to conduct their illict activities, hopefully the point of cessation.

This isn't the first time counterfeit money was used as an economic weapon and it won't be the last.

Counterfeiting may seem like an activity incapable of affecting national scale, but countries and individual agents continue to do so because it often tends to work - at least as a catalyst to bring about the intended economic consequence.

Just like every other country has to do in war, America had to fund its Revolutionary War, and, as a new country without a central bank or the like, was in the unfortunate position to have to rely on paper money to raise funds. Public trust in Continental paper money was incredibly low since they essentially amounted to bonds that were payable after an American victory - an outcome many considered nearly impossible.

Although the Continental Congress declared that not accepting the Continental money as payment was tantamount to treason and that any persons who did not accept Continental money would be sanctioned against trade or intercourse with colonial inhabitants, rampant inflation nonetheless "set in as the bills' value plummeted at exactly the time the fledgling government needed resources."

Adding fuel to this economic fire, Britain began counterfeiting Continental currency: "[I]n January 1776, the British government began undermining American independence by attaching the American economy: it turned out great quantities of sham American money, advertising in New York's Tory newspapers that "Persons going into other Colonies may be supplied with any Number of counterfeit Congress-Notes for the Price of the Paper per Ream."

Josiah Bartlett, a signer of the Declaration of Independence, considered Britain's actions "the most diabolical scheme to ruin the paper currenc by counterfeiting it," noting that the fakes were "so neatly done that it is extremely difficult to discover the difference." The "Tory plan," he said, was "one of the most infernal that was ever hatched."

The counterfeiting of Continental paper money was "the first recorded instance of wartime financial sabotage."

Although whether or not Samuel Curtis Upham was acting on behalf of the Union or acting as an independent agent has been debated, Upham was essentially single-handedly responsible for wreaking considerable economic devastation to the Confederate-led South.

Upham, a Northerner and a strong supporter of the Union, ran a store that sold goods such as stationery, newspapers, and cosmetics before starting his counterfeiting enterprise. In 1862, after seeing customers’ interest in Confederate money for its novelty, Upham began printing fake Confederate notes to sell to customers.

Soon, customers began to use his counterfeit currency to actually use as real money, prompting Upham to expand his counterfeiting business and began to print counterfeits in massive quantities. Quickly, these counterfeits found their way to the South; Union soldiers who got their hands on counterfeits were eager to spend it when in Southern territory.

By 1863, counterfeiting and inflation have gotten so out of hand that the value of the Confederate dollar plunged so low that it was hardly worth counterfeiting.

Once the operation was “Operation Bernhard”, it was decided that the Jewish prisoners in concentration camps who were skilled in draftsmanship, engraving, printing, and banking were the ones who would be manufacturing the counterfeit bills.

By the time the Operation stopped production, the artwork, but neither the paper nor the serial number, for US currency was perfected.

Of course, Operation Bernhard wasn’t ultimately successful – Germany lost WWII – but it did make enough of a dent in the British circulation that the Bank of England had to release new banknote designs after the war.

In 1958, Guinea – a French colony until this point – voted to become independent from France and become a sovereign, independent republic. France, fearing that it would lose access to the natural resources found in the region began to introduce counterfeit Guinean currency to the new country’s economy, quickly collapsing it.

Guinea ultimately had no choice but to join the French-controlled CFA franc-zone (the constantly-changing CFA franc-zone is currently comprised of a group of 14 African countries that use currencies guaranteed by the French treasury).

In the 1980s, the CIA gave the religious guerrilla force, the Mujahedin, with an estimated 2 billion dollars in counterfeit Afghan money to fund the force with ‘money’ that is to be introduced into the local economy, in order to weaken Afghan government and the Soviets, who had a dominant presence in the region, through inflation.

In 1992, the New York Times published an article titled “Fake-Money Flood Is Aimed At Crippling Iraq’s Economy” that revealed the CIA had introduced ‘vast amounts of counterfeit currency’ into Iraq’s economy as a part of an American-led destabilization campaign against Iraq.

Several Western nations, Saudi Arabia, Iran, and Israel were participants in this destabilization campaign. Fake dinars were smuggled into Iraq across the shared borders with Jordan, Saudi Arabia, Turkey, and Iran.

The Current State of Counterfeit Money in Circulation

There is an eternal struggle between counterfeiters and governments:

The latest series of US currency includes sophisticated security features such as watermarks, security threads, and color-shifting ink. “But these technological breakthroughs should not permit complacency: the counterfeiters will soon discover a way to reproduce the most advanced security devices we have today”

Right on schedule, the US has announced plans to release a new series of currency into circulation within the next decade 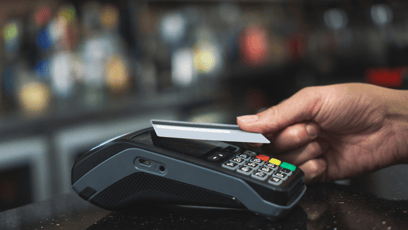 How Fraudsters steal IDs, credit cards, and your profits.

Fraudsters continue to use various nefarious methods to defraud liquor businesses and consumers...