Before the advent of the internet, global electronic communications, and online databases, it was a simpler time for the world of fraud: mainly consisting of counterfeit money and documents signed with a forged signature. While these crimes caused inconvenience and loss, the extent of the damage was relatively limited in scope and financial loss compared to today.

Before the turn of the century, people simply didn't need to worry about large-scale data breaches- a good number of businesses still operated through good old-fashioned paperwork, not data entry. I bet you can still remember the days when you needed to tell the pizza place ahead of time that you were planning on paying with a credit card so that the delivery driver could bring the carbon paper with him/her; if you didn't, you hoped you had enough spare change around the house to pay for the pizza with cash. Unless a criminal were to break into the pizza place and copy/steal written credit card info, your financial info and identity would remain safe.

It is the same technology that allows us to place pizza orders with greater ease than ever before that gives cyber criminals opportunities to exploit any weaknesses in a financial system. The answer to this problem isn't to do away with technology- who wants things to take more time? The answer is to understand financial technology in the way criminals understand it, and to find weaknesses and strengthen them before identity thieves find a way to exploit them first. 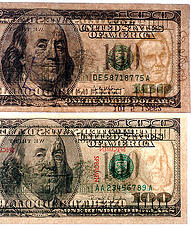 Desktop publishing to make money:  A simple business concept used either to supplement income or...

I found the below article so compelling, and so important as it relates to the current environment...