After a more than 7-year wait since the U.S. Bureau of Engraving and Printing (BEP) first introduced a signicant redesign of a U.S. banknote, in 1996, the public is about to see the newest, and most hi-tech U.S. bill ever produced when the new $100 comes into circulation on October of 2013.

redesign of a U.S. banknote in decades, and was the first to utilize the "big head" design that users of U.S. currency are now very familiar with.  Previous to the 1996 design, all U.S. banknotes had utilized a much smaller image of the U.S. historical figure featured on the banknotes. As seen to the right, the image of Benjamin Franklin occupied less than 15% of the surface-area of the $100 note.  This was counter-intuitive, since much of the advanced printing technique used to secure the older banknotes - intaglio printing - was contained in the image.

Thus, when the bill was redesigned in 1996, the image-size was increased by 60%.  The now-familiar "big-head" design was carried into the other banknotes ($5, $10, $20 and $50).  This enlarged image allowed for a larger area in which detailed intaglio printing could be featured. 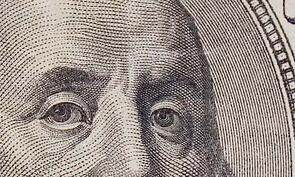 Intaglio printing, which requires engraved printing "plates", enables the creation of fine-line printing detail, as seen in this close-up image to the left.  When combined with very heavy printing presses such as those used by the BEP, the effect creates a rough "raised" feel in the printed surface which is distinct and can be detected using one's fingers.

Intaglio was not the sole new security method included in the 1996 banknote.  The BEP also introduced infra-red printing inks, which can only be seen by an IR imaging device. These "IR features" are a key technique used by automated bill authenticating devices, such as vending machines and ATM machines, for the identification of banknotes.

The 1996 $100 bill was also the first U.S. banknote to utilize color-shifting ink.  This is a type of optically-variable ink that shifts and changes colors as the angle of light changes.  Thus, on the 1996 banknote, the large printed "100" in the lower right-hand corner on the face of the banknote shifts from copper to green when the owner tilts the bill back-and-forth.

The new 1996 $100 banknote was the first time the BEP added a fluorescent UV security feature to the US currency.  Other national currencies had included UV features for years. Around the globe, the use of UV lights as a means for validating banknotes had proven to be a very successful and cost-effective method of enabling retailers and other members of the public to be confident that they were not acepting counterfeit notes.

Thus, when the BEP released the 1996 $100 bill, many were excited to realize that the U.S. currency would now have this security, as well.

Unfortunately, the method and quality of the 1996 $100 bill UV security feature left much to be desired.  A combination of a poor choice of color (pink) and inconsistent quality of the feature, itself, made verification of the $100 using UV lights somewhat problematic.  It was not impossible to see the UV feature, but to do so, one had to use a powerful UV light source, and look closely and carefully in order to see the feature.

So it was that we were very pleased to hold the new 2013 $100 bill and discover that the UV security feature - while still pink in color - has been vastly improved in quality.  As can be seen in the image at the top of this article, the new fluorescent feature glows brightly, and is much thicker and bolder than the 1996 notes.

Also, as can be seen when compared to our UV reference guide, the new 2013 $100 bill UV feature is located in exactly the same position as in the 1996 note.

So, if you are already using FraudFighter UV lights, you won't need to do anything to upgrade or update your FraudFighters, or your employees.

The latest term trending in the financial world is cryptocurrency.