The U.S. Secret Service beleives that Peru may now be the leading source of counterfeit U.S. Dollars.

This is no great surprise.  We have previously reported the phenomenon of Peruvian counterfeits going back as far as 2010.  However, what is alarming is the sohistication and rate of growth of the operations seen in Peru.

Some 17 percent of the false bills circulating in the United States come from Peru, according to one US law enforcement agency.

One of the reasons is technology. The counterfeiting gangs in Peru are now using offset printers rather than photocopiers and digital ink printers. Plus, Peru's open "entreprenurial" environment for counterfeit operations has attracted some of the world’s most skilled counterfeiters, who employ painstaking, traditional techniques to give their bills apparent authenticity.

“They are specialists in giving it the tonality, texture, the watermark. Each of these bills goes through a rigorous process,” according to the head of the Peruvian police’s anti-fraud unit.

Some Peruvian counterfeiting gangs use a needle to pierce the bills and pull through a fake metal security thread, an extremely delicate, time-consuming task that only the steadiest, most skilled hands can pull off.

This shift by the Peruvian gangs towards higher-technology offset printing is a disturbing  issue.  In previous posts, we had discussed Peru as the "washed banknote" headquarters of the world.  Large-scale operations were involved in capturing U.S. $5 banknotes in quantity and bringing them to Peru.  Counterfeiters then "washed" the ink off the $5 bills so that the paper could be used to print $100 counterfeits on top of the genuine $5 banknote paper.

While this washing process created genuine-feeling banknotes, the digital printing techniques used on these notes made them fairly easy to detect by persons who were experienced in money-handling.

With the advent of off-set printing, Peruvian gangs have changed the game.  Now, it will no longer be so easy to detect Peruvian counterfeits using only the naked eye.  This is because off-set printing, which uses printing plates and professionally mixed inks, creates the fine-line detail and color fidelity that digital printers are incapable of producing.

Skilled counterfeiters are also able to reproduce some of the more commonly-used verification features, such as magnetic ink, watermarks, and color-shifting ink.

With as much as 17% of U.S. counterfeit currency now coming from Peru, the question many should be asking themselves is: how will I be able to secure my business against the losses that might result as a result of these high-quality counterfeits?

The answer lies in having counterfeit currency detection equipment that examines multiple physical factors, incuding machine-readable characters, and conducts a full forensic analysis of the note to identify and determine what type of note, exactly, it has been presented.

Want an entertaining dinner party activity? Ask people around the table if they know how to tell... 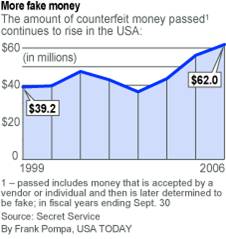