Over the past 14 months, the Bank of Canada has released a series of newly designed banknotes. The new polymer notes feature a slew of security features, including raised ink, a transparent strip containing a metallic images that change colour when you tilt the bills, transparent text, and a frosted maple leaf window.

The new notes were purported to be "impossible to counterfeit" when they were first released to the public.

From Vancouver, according to this May 26, 2013 article on Technorati, a large supply of the new counterfeit $100 notes has been spreading eastward.  This information is corraborated in a separate article printed in the Globe and Mail which also claims the source of the counterfits seems to be Vancouver.

This episode highlights what we feel is a reality as it regards counterfeiting.  There will likely never be a "counterfeit proof" banknote.  While it is always possible to raise the bar, and to make it more difficult or technologically challenging to produce credible forgeries of a banknote, in the end, the motivation is there for the bad guys to circumvent the new security.

This is not meant to make the argument that it is not possible to design a non-forgeable banknote.  It very much is within the reach of available technologies to do so.  The problem lies with the COST of implementing such technologies. Some options available for anti-counterfeit security might include advanced 3-D holograms, microdots, nano-crystals, digital watermarks, optically-variable devices and even a type of heat-activated RFID chip.

However, these technologies are prohibitively expensive when the sheer volume of banknotes is considered. 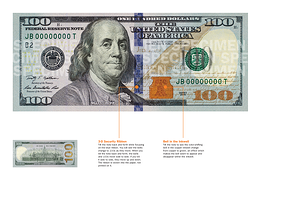 As an example, in 2013, the U.S. Federal reserve has ordered 2.5 Billion units of the newly designed $100 bill to be produced.  This means that individual security elements included as part of the design of the notes must cost only fractions of a penny per note to produce, or the cost of producing the banknotes themselves will become too great.

Also, when considering bankote designs, treasuries must consider that the public, themselves, must be able to conduct the validation, preferably without the aid of any type of device. THIS, in addition to the cost, explains why the persistence of non-sophisticated banknotes seems to be the norm these days.

For the new Canadian banknotes, a decision was made to switch to polymer materials instead of paper as the "stock" upon which the notes were printed.  This led to a vastly increased cost of production.  The move to polymer was intended to serve two general purposes, 1) to extend the useable life of the notes, thus leading to lower long-term printing costs, and 2) to create a barrier for the "amateur" counterfeiter who is unable or unwilling to source polymer printing stocks, which are not commonly available for retail purchase.

This decision LIKELY led to other choices regarding which security features would be included in the note.  The resulting banknote has, therefore, leaned heavily on ink-related technologies (magnetic, ultraviolet, color-shifting, heat sensitive) which are not remarkably difficult to recreate or replicate on modern-day commercially available printers.

Ultimately, it should be no great surprise to hear that a newly designed banknote has been successfully counterfeited.  It has been this way since the dawn of the legal tender. 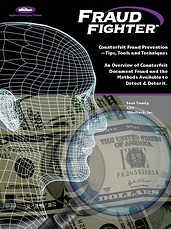