Ready For The New 100 Dollar Bill?

No Update From the Treasury Since June 2011

The U.S. Treasury has yet to announce a release date for the new $100 bill.  Last June they reported that the bill was indefinitely delayed due to production problems and they have not since provided an estimated release date.  The problem is due to some of the notes creasing during the printing process. 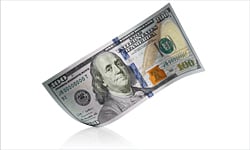 About 1.1 billion of the new notes were printed prior to discovering the problem and not all of them were damaged.  Several solutions have been implemented, including hand sorting the clean notes from the damaged ones. However,  the U.S. Treasury must be certain that the problem is not repeated, and that the solution is "sustainable and repeatable" before releasing the new $100 bill into circulation.


Security Features of the New $100 Bill

Whenever The Treasury announces the date, they will provide at least six months lead time between the announcement and the day of issue.  This long lead time is to give business that handle cash sufficient time to become familiar with the new security features and to have technology and procedures in place to identify counterfeiting attempts.