The latest term trending in the financial world is cryptocurrency.

Loosely defined, a cryptocurrency is a digitalmedium of exchange – a method to allow individuals to trade goods or services without resorting to a direct barter transaction, or an existing national legal tender currency (Fiat currency) – with the actual unit of payment being comprised of digital code representing a certain quantity of the cryptocurrency.  The world's "firstdecentralised digital currency" Bitcoin, was devised in 2009. Since then, numerous otherdigital monies have become available.Some of the more ubuiquitous entrants into the space include litecoin, peercoin, namecoin and dogecoin.

When comparing cryptocurrencies to fiat money, the most notable difference is that no single group or individual may accelerate, limit or in any other way significantly affect the production of money. Unlike national currencies, which are heavily manipulated by central banks, only a certain amount of cryptocurrency is produced by the entire cryptocurrency system collectively, at a rate which is defined prior to the creation of the currency, and publicly known.

One great benefit put forward by creators and supporters of cryptocurrencies is the anonymity of the use of such currencies.  The use of eWallets as the means through which such virtual currencies are exchanged does allow a user to hide their identity.  In the case of Bitcoin, the electronic log (called a “bookchain”) used to track and maintain the location and ownership of all existing Bitcoins, is encrypted in an effort to maintain anonymity.

Bitcoin exchanges are required to adhere to the same regulations as any other commodities-trading accounts. For example, an exchange must report any transaction above $15,000, a policy meant to stem money laundering. For the purposes of taxation, meanwhile, reimbursing somebody for a product or service in BitCoins is treated as a barter. The U.S. tax code makes provisions for such practices, though, admittedly, they can be tough to enforce.

Some American politicians are expressing grave concern about, Bitcoin, specifically, and virtual currencies generally. Common complaints include claims that such unregulated currency markets are “just what drug dealers have been waiting for”.

The encryption and exchange-control  mechanisms mean Bitcoin dealings can be challenging to trace. But not impossible. According to proponents of Bitcoin and other cryptocurrencies, it may be more difficult for a government agency to identify Bitcoin users than someone paying with a credit card. But it should be less-difficult than tracking those using cash.  They argue further that any illicit trade, including drug dealings, will typically involve physical products being sent to recipients. Authorities already track many packages sent by groups under investigation.  The high-profile bust-up of an alleged drug-dealer dark market, called “Silk Road” gives credence to this argument.

Another worry, for the authorities at least, is that, in theory, a Bitcoin account cannot be frozen. But, like cash, Bitcoins can be nabbed by seizing the computer on which they are stored.

Déjà vu All Over Again?

It can be argued that the rapidly-developing world of virtual cryptocurrencies may eventually become prone to counterfeiting and other scamming techniques.  Some have drawn an analogy to early phases in the development of fiat-currencies, when national currencies lacked strong, centralized governing bodies to control supply and production of currency.  The history of the United State’s dollar offers a fine example.

When the United States Secret Service was first established, its main duty was to prevent the counterfeiting of money. In the 1800s, America's monetary system was very disorganized. Bills and coins were issued by each state through individual banks, which generated many types of legal currency. During the period from 1793 - 1861, approximately 1,600 private banks were permitted to print and circulate their own paper currency under state charters. Eventually, 7,000 varieties of these "state bank notes" were put in circulation, each carrying a different design.

With so many different kinds of bills in circulation, it was easy for people to counterfeit money. During President Lincoln's Administration, more than a third of the nation's money was counterfeit. On the advice of Secretary of the Treasury Hugh McCulloch, President Lincoln established a commission to stop this rapidly growing problem that was destroying the nation's economy, and on April 14, 1865, he created the United States Secret Service to carry out the commission's recommendations. (As an interesting historical note, this was also the date on which Lincoln was assassinated).

Is it the Same, or Different?

Dozens of cryptocurrency specifications have been defined, but most are similar to and derived from the first fully implemented cryptocurrency protocol, Bitcoin. With Bitcoins, all transactions are secured using public-key encryption, a security technique utilized already in many online dealings. It works by generating two mathematically related keys in such a way that the encrypting key cannot be used to decrypt a message, and vice versa. One of these, the private key, is retained by a single individual. The other key is made public. In the case of Bitcoin transactions, the intended recipient's public key is used to encode payments, which can then only be retrieved with the help of the associated private key. The payer, meanwhile, uses his own private key to approve any transfers to a recipient's account.

This provides a systematic protection against Bitcoin theft. But it does not prevent an owner of Bitcoins from spending his Bitcoins twice—a virtual analogue of counterfeiting. 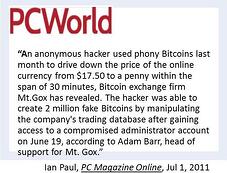 The defense Bitcoin places in its systems to  prevent double-use of Bitcoins is the use of the  “bookchain”.  This is a log, authenticated by the peer-  network of members of the Bitcoin community, which shows  all transactions that have occurred in the network.  Any  valid transaction must contain an up-to-date,  authenticated bookchain in order to be authorized by the  exchange.

Of course, as has been so much in the news these past  several years, it seems the greatest threat to

cryptocurrencies lies in the ability of hackers or potential inside-parties to break the system and infiltrate the security systems in place.  In a high-profile case in 2011, a hacker infiltrated Bitcoin’s database and artificially created 2 million units of the currency, essentially crashing the value of the currency to nearly zero.  While Bitcoin has recovered from this incident  (and, in fact, trades at near all-time highs, causing open discussion among financial pundits of a “Bitcoin Bubble), the future vulnerability of cryptocurrencies to such attacks cannot be overlooked.  As the size and volume of transactions conducted in Bitcoins, or any other digital currency, grows, the length, size and complexity of the “bookchain” will grow exponentially, and it seems likely that crafty fraudsters, armed with clever software, will be able to take advantage of the system.

More recently, in a story from Dec. 5, 2013, it was revealed that a hacker group in Germany had utilized a complex “botnet” to cause other people’s computers to illicitly create nearly €700,000 in Bitcoins.  Details of the fraud are not yet available, but this incident reveals that, as recently as just two weeks ago, the Bitcoin network is still vulnerable to hacking attacks.

It seems increasingly likely that cryptocurrencies will find their niche in the world.  Many who are disenfranchised, unbanked, or must - for any number of reasons - operate “off the financial grid” will find these platforms a boon.  This will likely include criminal and terrorist groups, alongside legitimate individuals who choose not to have their dealings known.

Any individual that chooses to transact in these currencies must be prepared for the potentiality that they have been victimized by someone having produced “e-Counterfeits”.