It was last year that I heard a prominent loss prevention professional - a name that many in the industry would instantly recognize as a keynote speaker at conferences and seminars - say to me: "You can't expect your cashiers to be able to prevent fraud from occuring in your stores." Or something along those lines. The conversation occured at the FraudFighter booth at the NRF Loss Prevention show in June of last year, so I may not remember the exact words he used. But the general gist of the comment was the same. When asked to elaborate, he explained his viewpoints. First, in his industry (quick service restaurant), the cashiers tend to be younger, less experienced, and not terribly engaged. He said it is a challenge just to get them to take orders properly, accurately count the money they were receiving from the customer, and count the money they were giving in change. He further explained that the long lines at the register, impatient customers, and a general skew towards a "customer is always right-ism" means he couldn't possibly imagine trying to make those front-line people do more than just get the customers' payments as swiftly, painlessly, and accurately as possible.

To be clear, I am not going to name names or divulge our clients' identities. But it just so happens that at the same time of the discussion, one of our oldest clients in the quick service restaurant industry was also standing at our booth. In fact, our two clients know each other pretty well - and the latter looked at the former with a bit of shock on his face. Again, I am paraphrasing, but he said something to the effect of: "That is just about the worst advice I have ever heard about loss prevention. What better way to keep track of the money than the people actually performing the transactions?"

A moderately heated (but goodhearted) discussion followed. The first fellow, who is responsible for loss prevention at thousands of locations, described their large investements into video surveillance and the digital tools to monitor and evaluate fraud. He said that if someone comes into their stores and passes a fake note, or uses a stolen or forged credit card, they can usually idenify the person who did it on the surveillance video.

"Great," I said, "then what? Give the image to the police so they can chase down this unknown person for charging $12.00 on someone's stolen credit card number?" The first client agreed and laughed a bit about it. "What's the point", he mused, "of detecting that the credit card was bad after you've already let the food walk out the door?"

I think what was really going on in the mind of the large chain restaurant operator is that there is a real stigma attached to trying to ask the people on the front lines to get involved. True, it can be a frustrating experience running the front-of-house of an enterprise operation with thousands of national and international locations. The amount of management calories it takes to put a new initiative in place is daunting.

But our first client said some surprising things relative to his implementation of FraudFighter UV16's at the counters and drive-through windows in his 700+ store locations. Very quickly, the number of detected fraudulent transactions dropped: Not only did they see reduced losses, but they saw a significant reduction in the number of attempted frauds against them.

In short - the Deterrence Effect of having counterfeit detectors in place and being used by the cashiers effectively led to the elimination of the fraud problem. 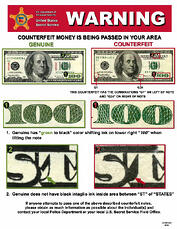 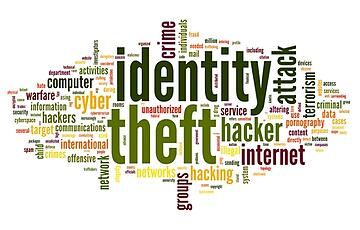 May 6, 2013 - Identity Theft is the Most Significant Threat to Privacy

When you sign up for something online, whether it's a social media site, shopping platform or...