Many people were shocked and amazed that the Sonoma County Sherrif’s office had arrested two 19 year olds who were driving a $240,000 McLaren F12 sports car.  However, the real shock came when it was discovered that the car was rented, and that the teenagers had used stolen credit cards to complete the rental transaction.

Unfortunately, this is not an uncommon experience. In fact, rental car agencies are rife with “exception” transactions – that is, a transaction which ends up with a payment issue, or stolen inventory.

Because we are in the confidence of several major rental agency companies, who use FraudFighter equipment in an effort to combat these fraudulent transactions, we are not at liberty to discuss specifics.  However, it is permissible for us to say that in some of the larger companies which operate thousands of rental locations, it is not uncommon for one or more vehicles to disappear every day. The culprit in most of these fraudulent rental car transactions comes down to – identity theft perpetrated by organized crime rings.

Many of the rental car agencies have been targeted by organized criminal groups who are comfortably partnered with the “dark markets” where stolen identity data and high-caliber forged documents can be purchased.

A Helpful and Timely Case Study


Two years ago, we wrote a case-study that dealt very specifically with this issue.  In this document, we discuss in some detail what happened when one of the largest car rental agencies in the world conducted a pilot of the FraudFighter Advanced ID Authentication Equipment in one of their highest-volume locations in America.  Spoiler:  the results were phenomenal! 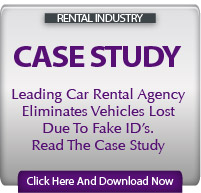 Not the End of the Story

Getting back to those two 19 year olds at the beginning of the story. It turns out that they hadn't only used fake credit cards to rent the high-end sports car.  They also rented a $12Million beach house, at a price of $27,000!

One of the suspects has also been charged with an event in March this year when he allegedly used stolen credit cards to purchase a large quantity of Apple products.

When a criminal finds a vulnerability, they will usually keep attacking it until the vulnerability is closed......or they get caught!   Kudos to Sonoma Police for thinking two teenagers in a quarter million dollar car looked suspicious!