Remote Car Sales – a Playground for the Professional ID Thief

The rate at which Identity Theft is growing in the United States is nothing less than shocking. Total ID theft reports filed with the Federal Trade Commission increased from 650,523 reports in 2019 to 1,387,615 in 2020 – a more than 100% increase!

People filed more reports with the Federal Trade Commission about Identity Theft in all its various forms in 2020 than any other type of fraud complaint.

Regarding identity theft fraud in the auto-sales industry, the numbers are just as disturbing. From the FTC’s 2019 Fraud Data Book, the data shows consistent numbers for several years, with new-car sales identity theft totaling around 35,000-36,000 reports every year: 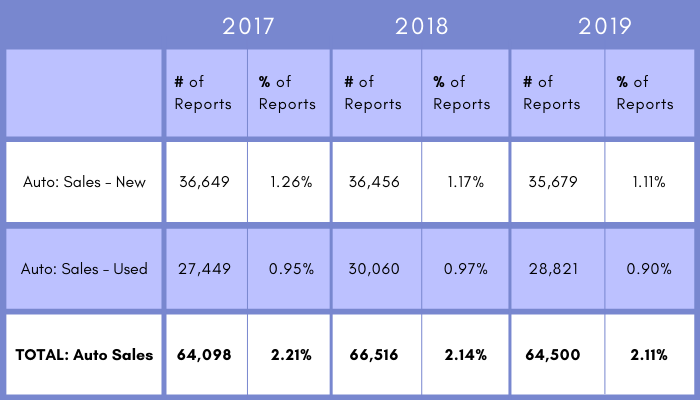 The recently released FTC numbers from 2020, which have yet to be compiled into the full Data Book, show that this number jumped by over 12% in one year.

What was different in 2020? Well, nobody should really need to ask that question. The COVID-19 pandemic caused a seismic shift in the way we do business, with the most notable change being the rapid shift to Consumer Not Present (“CNP”) sales. Stated differently, auto dealers were suddenly thrust into the need to sell cars to customers who never came onto their lots. The industry was forced to move the entire auto purchase transaction away from the old model of “on premise” to “online”, where the financing, the document signing and to some degree, even the vehicle delivery is all being conducted without ever meeting the client. 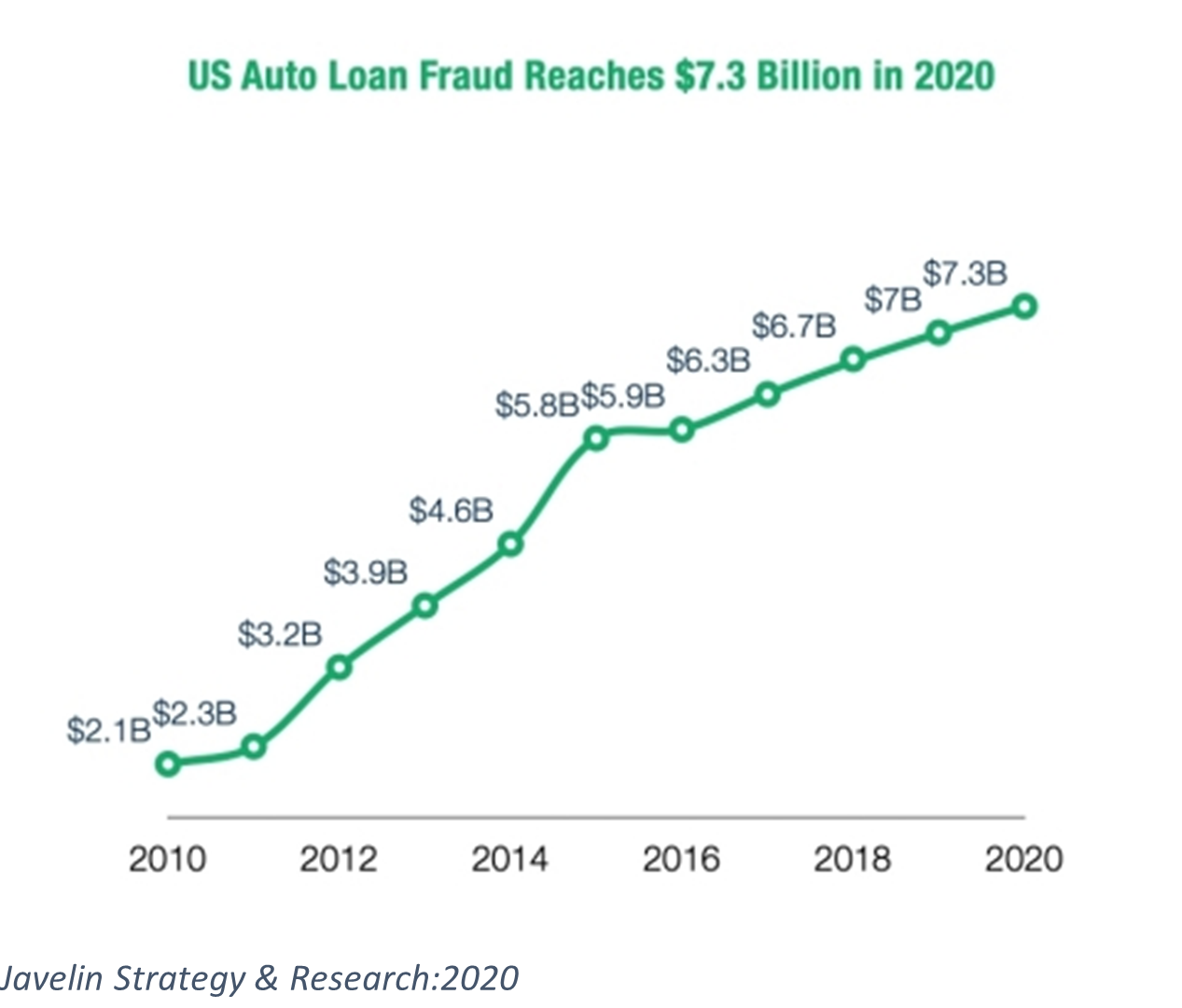 While this trend towards pure online auto sales was already underway prior to the COVID-19 outbreak - and subsequent shelter at home orders across America - most dealers had been playing cautiously with it. Major infrastructure challenges arose when, all of a sudden, every dealership across the country needed to have a fully functioning internet sales operation, including solutions for running credit applications, processing trade-in vehicles, accepting online signatures, and dropping off vehicles at the buyers’ locations. And, of course, all of this needed to happen immediately.

There should be no surprise that in the rush to put in infrastructure so quickly, corners were cut, and vulnerabilities were created. After all, there are a finite number of IT consultant/vendors capable of designing and implementing these solutions. The sudden high-demand for their expertise led to long backlogs and sharp increases in the cost of implementation. This, in turn, led to decisions to postpone certain elements of the full solution, either because the staff was not available to implement, or because the costs were too high. Exacerbating this was the fact that the entire economy was facing a time of extreme uncertainty. This affected not just the ability to forecast demand from the consumer side, but also the ability of manufacturers to deliver inventory to dealerships. This created a genuine hesitancy for many dealers to make large capital investments.

Ultimately, what developed is a perfect set of conditions that caused the auto sales industry to become a target-rich environment for identity fraud operations.

With vast quantities of stolen ID data available for sale, and a robust “Dark Market” network where such data can be bought and sold anonymously, a startling figure was released by Javelin Research last year: Americans’ have a roughly 1-in-20 chance of being victimized by identity theft in any given year.

Criminals are, generally, not fools. Particularly if they are part of a larger organized crime ring that runs time-tested “fraud plays” over and over again around the country and across the globe. The ground level “casher” – the person who will actually commit the crime - knows that there is risk in what they do, and thus, they are motivated to target transactions where the largest possible profits can be realized. This means single, high-value purchases resulting in an asset that can be easily resold through the criminal network for a quick cash payout.

Automobiles are very high on the list of such transaction types. Automobile values can easily range from $30,000 to $70,000, or more on a single purchase. The asset can be readily stripped into parts and sold out of state or out of country. In fact, it isn’t even necessary to strip the vehicle, as a more recent trend in stolen vehicles has seen brand new autos shipped, complete, to certain overseas markets where they sell at a large premium over North American retail prices. According to a US Customs & Border Protection presentation from 2019, vehicles stolen in this manner are sometimes loaded on containers for shipment to foreign countries within as little as 4 or 5 days after they drive off the lot.

All of this means that the casher is able to quickly and easily get paid-out for their activities. Which results in a steady and willing supply of people waiting to fill the casher role.

The combination of readily available stolen identity data, spotty or incompletely secured remote sales channels, and a supply of eager gang members willing to cash-in on the ID theft game has led to the epidemic of ID related car thefts over the past several years. 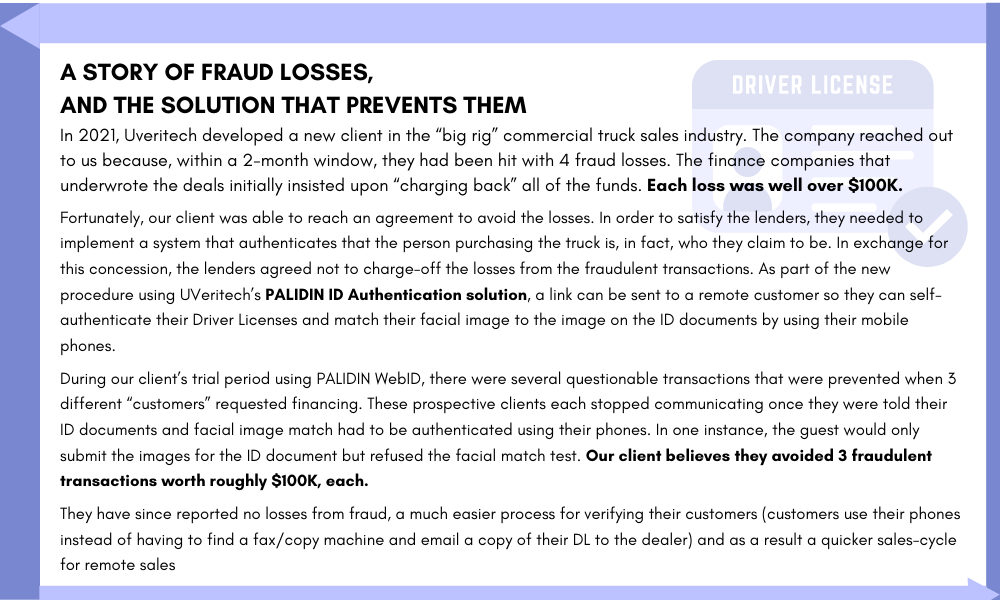 Data for 2021 has not been easy to come by, but many in the industry expect that, when tallied, the trend of year over year auto financing fraud increases will have continued at the same alarming rate seen in prior years.

The results are in, and even we have to admit that we are astounded by what has happened.

Following a recent online attack that resulted in the diversion of tax refunds and the theft of...