It is a widely held belief these days that the end of the “cash economy” is upon us.  With rapid growth in online commerce, it would be understandable that many might assume that before long, we won’t even be able to use a physical payment instrument in the future. And, with the use of the second-most popular physical payment option - the personal check - sharply on the decline over the last decade in favor of payment cards, especially debit cards, it seems a reasonable assumption.

However the Diary of Consumer Payment Choice, conducted in October 2012 by the Boston, Richmond, and San Francisco Federal Reserve Banks, suggests otherwise.  Consumers choose to use cash more frequently than any other payment instrument, including debit or credit cards.

Cash plays a dominant role for small-value transactions, is the leading payment instrument for many types of purchases, and stands as the key alternative when other options are not available. In certain cases, including that of mostly lower-income consumers who lack access to alternative payment options or find them too costly or difficult to obtain, cash is also used for relatively larger-value transactions.

The Fed-Reserve paper highlights a number of key take-aways from the data:

Cash is the most used retail payment instrument.

The average American consumer conducted 59 transactions, including purchases and bill payments, and 23 of these 59 payments involved cash. At 40 percent, cash makes up the single largest share of consumer transaction activity, followed by debit cards at 25 percent, and credit cards at 17 percent. Electronic methods (online banking bill pay and bank account number payments) account for 7 percent, while checks make up 7 percent.  All other payments represent less than 5 percent of monthly transaction activity, with text and mobile payments barely registering at less than one half of one percent.

Cash is the dominant instrument for low-value payments.

Cash is widely used, even where other payment options are typically available.

Cash is the leading payment instrument for several expenditure categories, including gifts and other transfers between people food and personal care supplies; entertainment and transportation; medical, educational, and personal services; and government and nonprofit expenditures. It is the second most frequently used payment instrument for all other categories except housing.  The reason cash is the most or second-most frequently used payment instrument is because small value transactions tend to dominate these categories. Moreover, the fact that debit cards tend to be used frequently for these expenditures as well indicates that cash usage likely is not the result of a lack of access to alternative payment options.

Consumers who prefer cash are a diverse group.

Consumers of all age groups list cash as their preferred payment instrument. Contrary to conventional wisdom, 40 percent of 18 – 24 year olds actually prefer cash, the highest percentage of any age group. At the same time, this age group also has the highest preference for debit cards. It is possible that a segment of younger consumers prefer cash because they have limited access to banking and other financial products and services, in part due to typically lower incomes in early adulthood. Older consumers are more likely to prefer credit cards and checks than younger adults – and are less likely to prefer cash than younger adults. The much higher percentage of adults over 65 who prefer credit cards relative to other age groups, particularly the youngest adults, is also likely correlated with income.

Don’t throw Away Those Counterfeit Detectors Just Yet!

All of the above means that businesses should expect to continue to see the widespread use of cash.  In fact, the Federal Reserve Bank has no plans to reduce the quantity of physical currency in circulation any time soon.

This implies that businesses will need to continue to be vigilant when accepting cash payments, because the bad-guys are getting better and better at making counterfeit currency! So, keep using your FraudFighter UV Counterfeit Detection devices, or upgrade to the CT-550. 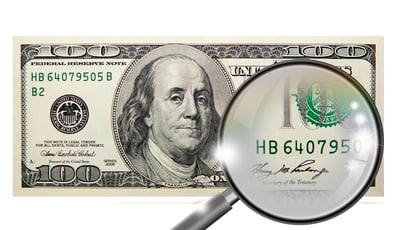 A quick perusal of recent news stories using the keyword “counterfeit money” reveals the most...