Protect Yourself From IDentity Theft

Identity theft has become increasingly sophisticated in the modern, electronic era. Studies show that this type of theft may be the most frequent and costly crimes in the United States.  Criminals are using a variety of techniques to steal information.  Hacking corporate or government databases, high tech skimming of data at checkout counters and phishing scams are among the most frequent types of identity theft.  However, the attacks on individual Americans continues to grow as more and more people are simply throwing confidential and sensitive personal data out with the trash or are victims of an email, internet or telephone pretext scam.

Protecting yourself against identity thieves is as simple as following the three D's - Deter, Detect and Defend.

DETER would-be thieves from accessing your personal data by simply shredding your documents before throwing them away.  This prevents thieves from "dumpster diving" and obtaining account information, prescription and other medical information and even credit card and other financial accounts.  Be careful who you provide information too.  Be extra wary about unsolicited phone calls from thieves pretending to be from your bank, utility provider or other service provider.  Often these are fronts for identity theft rings.

DETECT instances of identity theft before any real damage is done.  By checking your credit report, and credit score regularly will tip you off to unauthorized use on your accounts or id new accounts were opened that you did not apply to.  Checking your outstanding balances on credit card is a good way to protect yourself against "skimming".  Skimming occurs when thieves place number readers on credit card machines or ATMs to capture your credit and security data.  Regularly monitoring your credit report will highlight changes allowing you to contact your credit card agency before to much damage has occurred.

DEFEND yourself against identity thieves, if you suspect fraudulent activity on your credit report, immediately contact the credit reporting agencies and place a Fraud Alert on your report.  This will help prevent would be thieves from opening new accounts because the reporting agencies would require you to contact them to verbally authorize any new account or to provide verifying information before the account is opened.

It is not only credit cards, debit accounts and checking accounts that are primary targets for thieves.  identity theft now includes theft of land line accounts or cell phones, cable and satellite television service, power water and gas as well as internet service.  These staples of the American life are increasingly target as more and more thieves simply want to assume a victims total identity.  Using your stolen identity to finance cars, boats and even homes has been on the rise.  And it's not just individuals.  Businesses are increasingly targeted as thieves figured out that stealing a corporate identity reaps greater rewards with larger credit lines and less chance of getting caught because many business, especially small businesses don't have the document controls in place to prevent theft.

Although you can't prevent large scale theft of corporate databases or skimming at the local book store , shredding documents, checking credit scores and guarding your personal information helps protect you from identity theft. 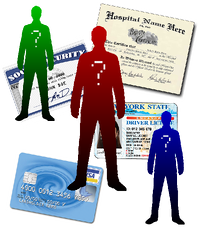