Every so often an identity fraud story comes along in the news that is not only impressive in its own right, but also perfectly illustrates the need to verify that ID. One such case came to our attention quite recently, mainly for the identity of the victim as well as the staggering sum they lost to the thief.

The victim in this case was not your average Joe, but a real estate mogul and chairman of the Irvine Company, which is largely responsible for creation of the city that bears its name. Last year, the billionaire Donald Bren was due to receive a $1.4 million tax refund from the federal government, but then his doppelganger intervened. Moundir Kamil got a hold of the billionaire's social security number and date of birth, along with other personal information, and promptly used it to make a fake driver's license in Bren's name.

Kamil was evidently so sure of the lax security at the bank where he presented his counterfeit ID that he did not even bother changing the photo on the card; opting instead to use his own. Kamil was 41 at the time of the crime. Donald Bren, born in 1933, is some three decades older, yet this seemingly glaring red flag was never noticed during the many times Kamil visited the East West Bank branch where he set up new accounts using Bren's information.

Within a month after depositing the $1.4 million in four bank accounts, Kamil transferred all but around $200,000 in certificates of deposit and $65,000 in cash to his own accounts. He gave a mailing address in South Los Angeles, and listed his occupation as “smoke shop”, neither of which stopped the transaction.

Kamil managed to avoid identification until his photo, taken by a bank surveillance camera, ran in the Orange County Business Journal. Within a few a days, a prison guard recognized him as a former prisoner from 2006, and Kamil was quickly arrested. If not for the sharp-eyed guard, the identity thief might well still be on the loose.

Kamil's previous conviction, for which he just finished serving his sentence, was bank robbery. Between 2003 and 2006 he served time for a string of nine robberies around the Los Angeles and Orange County areas. He netted around $30,000 in total from all nine. Apparently he picked up some valuable skills while in prison, because as soon as his supervised release ended, he went right back to work and picked up about 40 times more with considerably less effort. The alarming thing is, he may well serve as a role models for future bank robbers, turning them to more lucrative white-collar identity theft crimes.

Finally, let us not excuse the bank's role in this crime. It is only fitting that they be responsible for the $1.1 million used up by Kamil, because it was largely through their negligence he was able to obtain it. It is clear the steps they took to verify Kamil-Bren's identity were perfunctory at best, and lazy at worst. When the strategy and technology for multi-layered fraud prevention is in widespread use already, there is simply no excuse to not have a version of it set up to protect against this most common, and most basic of identity thefts. 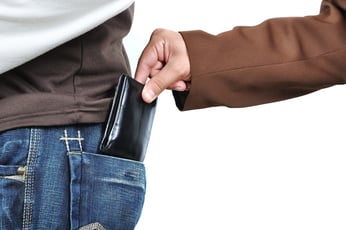 When it comes to assessing your risk of identity theft and fraud, being digitally compromised in a...