How easy is it to create counterfeit money? Up until a few months ago, the Reid brothers would tell you it is the simplest thing in the world. For three years, in fact, from 2005 to 2008, Glendon and Sheldon Reid made millions in counterfeit currency using nothing more sophisticated than chemical bleach, a scanner and a printer. The brothers were eventually discovered and arrested, but their story should caution us all.

It was not known from the Glendon's plea agreement the details of how they went about the counterfeiting, but the broad outlines were made clear during the trial. The brothers bleached $1 and $5 dollar bills – that is, washed the ink off of them – and reprinted images of $100 dollar bills onto the paper. The result wasn't foolproof – bleached bills only look genuine on the surface, where the new image is printed. The embedded watermark and security strip (the latter appearing only on $5 bills) remain unchanged. But it fooled enough merchants to convince the brothers they can make a good living doing it.

The bleaching process itself has many variations, and keeps gaining in popularity. A quick Google search yields thousands of websites trading advice on the most effective chemicals to use in dollar bleaching, the temperature of the water, the length of time the dollars should spend in the solution. There is good reason why this method has taken up such appeal: bleaching is currently the best way to make convincing counterfeits. The first line of defense against counterfeits in too many places is the detector pen; the bleached bills blow them away. Since the fake money is still printed on genuine paper, the pens never pick them up.

In the Reid's case, the duo printed a staggering $4.5 million worth of fake notes – and that is just what has been recovered so far. Sheldon and Glendon sold off the bulk of their creatio

ns at around 40% of face value, and converted much of the rest into actual cash, buying items from local stores and returning them for a refund. At their trial, each was charged with conspiracy to make counterfeit money; both also admitted that they taught others their bleaching techniques and transferred over digital images of the printed bills to others, further increasing the amount of counterfeits made.

The full extent of the Reids' damage will likely never be known. While over $4 million has been recovered by law enforcement, any number of additional fakes might still be in circulation. And of course the brothers' affiliates, armed with the same knowledge and tools, will likely be able to pick up right where the arrested duo left off. Counterfeiting via bleaching is extremely easy to begin – requiring just some bleach and a printer – and quite profitable if there is a critical mass of gullible shopkeers around to exploit.

Don't be one of the gullible shopkeers. Protect your business with a good fraud prevention detection program. Run every bill through a UV detector. Use ID verification and record the identities of customers who return items. And above all, stay vigilant – counterfeit money is out there, and sooner or later will make its way to you. 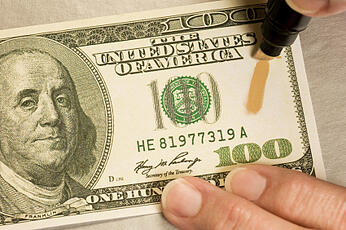 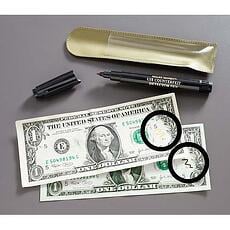