The busiest shopping day of the year is approaching, Black Friday. Businesses are expecting their highest volume of sales during this time of the year.  Last year 92 million Americans were reported to have participated in highest grossing shopping day of the year. Even Greater numbers are anticipated in 2014, thanks to the steadily improving economy. We should expect, then, that among this larger number of shoppers, that there will be criminals seeking to exploit and take advantage of retailers during their busiest time of the year. The influx of customers on Black Friday makes businesses more susceptible to criminals because enormous crowds create the ideal environment for criminals to take advantage of retailers. Employees are often too busy dealing with customers to pay attention to every detail, which makes it easier for the criminals to use counterfeit money or stolen credit cards to make purchases.

What can we expect this year during Black Friday?

As Black Friday is nearing, we can be certain that fraudsters have adjusted their methods and are ready to strike again.  Retail businesses should be prepared to prevent such thieves from targeting their business.  In particular, grocery stores and hardware stores, which were the highest targeted retail businesses on Black Friday last year, should especially be prepared for such thieves.  Electronics retailers, discount stores and computer and software retailers should also be prepared because last year they were the top targeted retailers for credit card fraud that occurred through online transactions. But any retailer who will be expecting a high volume of transactions, physically and virtually this upcoming Black Friday, should be prepared to intercept fraudulent credit card transactions. Customers have also reported that they will be opting to use cash this year instead of credit cards in order to avoid fraudulent credit card charges. 48% of customer said that they would be using cash instead of credit cards for their holiday purchases this year. Although this may decrease losses that are due to fraudulent credit card charges, it does not mean that retailers are not any less susceptible to losses. If more customers are opting to use cash for purchases, that means businesses are more susceptible to experience losses due to counterfeit currency.  Business should be prepared with the right tools and practices, this season, to verify and authenticate currency. 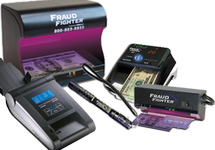 to verify and authenticate currency.